“We are all visionaries and what we see is our soul in things.” Henri Amiel

Owls have been catching my attention since August, 2016. I’ve been pondering and playing with ‘my word’ for the year. Having a word ‘choose me’ for a year helps ground, nurture, and draw me deeper into practicing being mindful and present.

While soulstrolling one crisp August morning in my neighborhood I happened upon an owl. Or, did the owl happen upon me? A large, brown speckled owl swooped above in Grace Cole Park,  perched itself in the tree across from me and proceeded to look directly at me with its deep golden eyes. My breathe slowed. Silence. Wonder. Awe. Eventually, in only the way owls do, it swiveled its head, and looked the other way.

I was the one to move and walk away. 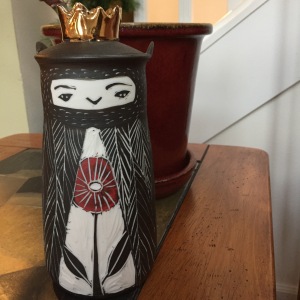 A week later, in an art gallery on Pender Island , British Columbia, owl revealed herself again. Sitting regally with golden crown upon her head, and a budding red flower upon her chest,  whispering, “I belong to you.”

Throughout fall owl continued to follow me: through an on line course with Pixie Lighthorse, in Christmas ornaments, floor mats, and through a soul collage card I’d made in 2015. Hm….perhaps someone is trying to get my attention? Is ‘owl’ my word for the year? I penned this one early morning in January, only to walk into Cupcake Royale in Ballard, Seattle, to view 3 owl paintings on the wall. Seriously?

So now will I give myself permission to receive ‘owl’ as my word for the year?  I can hear my  gold crowned owl hooting and exhaling “finally. Let’s see what wisdom I can gift you with this year.”

Owls have a lot to teach and speak through their symbolism in Greek mythology, Native American tradition, Hindu culture and Celtic spirituality. I am just beginning to scratch the surface. Owls are symbolic of wisdom, femininity, mystery, transition, discernment, intelligence, mysticism and protection (to name a few). They are a creature of the night and communicate in a unified voice. Owl is associated with the element of air and remind one to remain true to oneself, one’s voice and vision. Owl is reminding me to listen to my inner voice (an easy thing to forget for me in this particularly political time). One may call upon the wisdom of owl when needing to see the truth.

In Celtic mythology owls knew the way to the underworld and were defenders of truth and honor. Powerful! I am intrigued, excited, and curious to see where owl leads me this year.

Are you interested in having a word guide and ground you throughout 2017? Christine and John Paintner at Abbey of the Arts have a wonderful resource for this practice.

Thank you to the following site and book for  my beginning research of Owl: