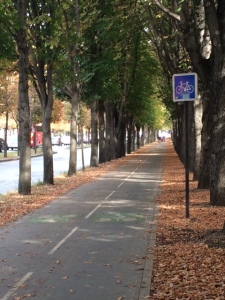 Yesterday I was able to take my soul for a biking day in Paris. It’s been something I’ve wanted to do for quite sometime and after a very helpful chat with a customer service rep at Velib, I was able to follow my desire and enjoy the adventure.  From quiet, wind blowing through my hair, taking in lovely scenery, to narrow passages between buses and curbs and a close encounter with a motorcycle accident – biking in Paris is not for the faint of heart. 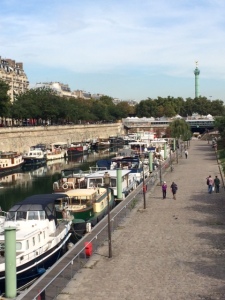 I’m staying in the 10th arrondissement in the Canal St. Martin and began by following the bike path along Quai de Valmy all the way to Bastille. I had a general idea of where I was going but was also game for getting lost and wandering about. I meandered my way along streets with bike patterns painted along the sides of the road (so you know which roads to follow). While this worked most of the time, there were a few points where it would simply end or in curve a direction that didn’t quite seem to make sense. I ended up at Marche d’Aligre – a very large open air market that had everything from produce, to fish, flowers and cheese, to amazing flea market antique finds. I 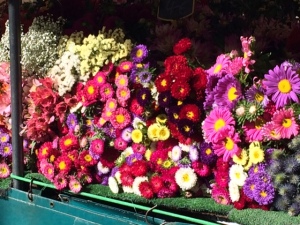 walked my bike through the crowds and sampled various products from the vendors who were calling out, ‘Madame, madame’… then something else in French which I don’t know how to write correctly here but which I understood to mean, try this! 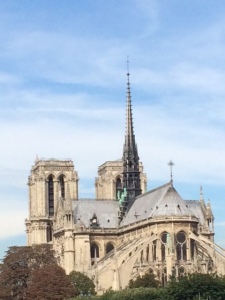 After the market I rode back toward the Seine and followed the bike path through the jardins des plantes and then along the Seine as it heads toward Notre Dame. There was a southern France food festival happening along the banks of the river, with a live band, food vendors, displays, foie gras tasting and more. I am continually amazed at events that I happen upon in Paris when I’m simply following my gut, paying attention to my soul and being willing to get lost. It 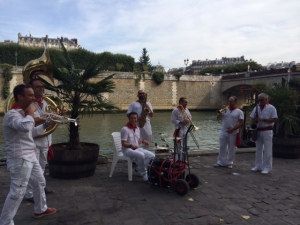 also helps that I had no set agenda for the day, didn’t need to meet anyone, or be anywhere in particular.

At some point riding along the bumpy cobblestones along the Seine got too jarring and I headed back up to the main road where the buses kindly shared their space with me. I was able to go down along the Seine again just before Musee D’Orsay and biked along to the Eiffel Tower. Even as I write this I continue to pinch myself : why yes indeed, that’s what I was doing yesterday, in Paris 🙂

I rode my way up to a familiar neighborhood, the 7th arrondissement and Rue Cler as I knew there was a Velib station there to leave my bike. I’ve been wandering the streets of this area for a number of years and it continues to feel like home. 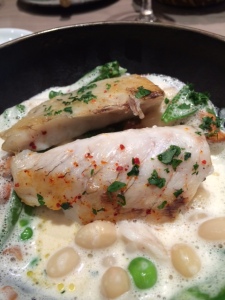 After a very delicious lunch at Les Cocottes, I wandered down to the Seine and lounged on one of the fabulous wooden chaises that are now set up in the floating gardens along the Seine. If you head down Rue Malar directly toward the Seine and then walk to your left you will find these amazing public spaces. There was a gentle breeze coming off of the Seine and 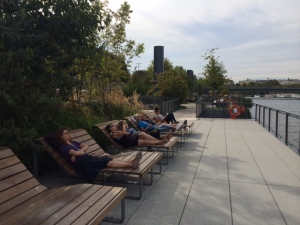 some shade and before I knew it, I’d dozed off into a lovely afternoon nap.

After waking an hour later I rented another bike from the Velib station close to me and was off, riding up and over the Pont d’Alma and then down the other side of the Seine, where there’s a lovely bike path all the way to the Tuileries. I went to ride through the Tuileries but individual bikes aren’t allowed (if you’re with Fat Tire Bike Tours though then you get to ride through here). After this point the bike path ended and I needed to merge onto the main road along with buses and motorcycles. This got a bit sketchy and nerve wracking as it was rush hour on a Friday afternoon – oops. Perhaps having a map of the bike paths etc in Paris would have been a wise choice? It all worked out well though and I was able to assist a young man whose motorcycle slipped out from underneath him, narrowly missing taking me out at the same time. I backed my bike back up on to the sidewalk where 3 other kind souls rushed to his assistance and together we helped him off the rode, lifted up his bike and called for an ambulance. Phew! 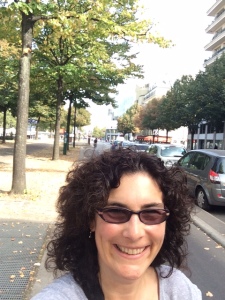 I took a bit of a breather on the bridge before heading off again, and found some back roads with bike paths, quiet tree lined streets, old buildings, very few cars and other bikers. It was a gift as I meandered my way back toward the Bastille where I followed the bike path all the way back to the Velib station right by my apartment. Ah. To write that it was a good day, doesn’t quite seem to capture it all. 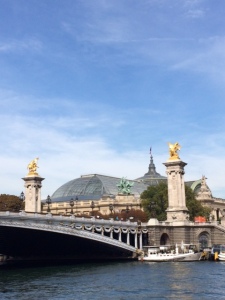 If you had a day in Paris to follow your own desires and longings, what would you do? If this interests you then consider joining Kayce Hughlett and I on our next Urban Paris Pilgrimage, May 9 – 16, 2015.